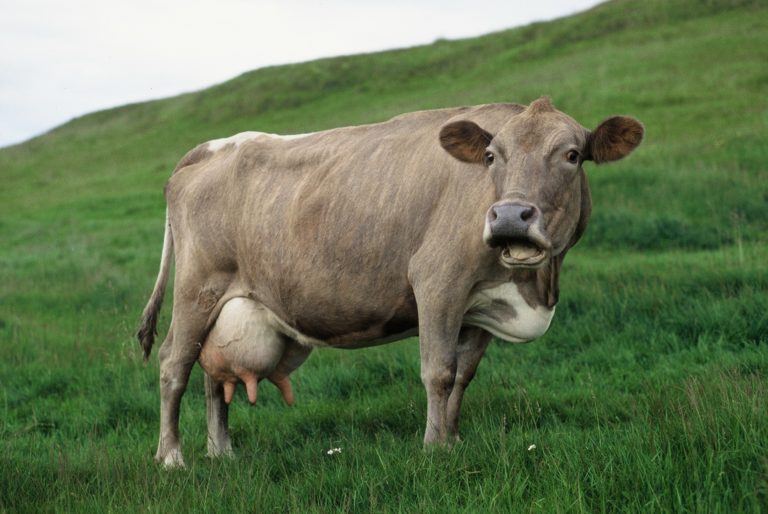 The first settlers in Iceland originated mostly from Norway but to some extent also from the British Isles. The cattle that first arrived in Iceland are likely to have come from different areas and when considering the difficulties of transporting animals even over short distances on land due to geographical barriers, it can be speculated that the founding population of Icelandic cattle consisted of genetically different individuals rather than being representative of one homogenous population.
Since the settlement, only a few cattle have been imported to Iceland in order to improve the breed, the last ones around 1870. This import appears to have had minimal effect on the breed and genetic research supports the difference between Icelandic cattle and other Scandinavian breeds.

The origin of the Icelandic cattle can be traced back to the settlement of Iceland in the 9th century by Norse migrants. Research has shown that the breed is related to the native breeds in Scandinavia. Records from the 18th and 19th centuries contain references of import of cattle to Iceland, but all indications point to the impact on the current Icelandic population being very limited.

In the early 20th century organized breeding programmes for the Icelandic cattle was initiated by establishment of several breeding associations. The breeding programmes initially emphasized reduction of the number of horned animals but never placed any emphasis on colour and patterns. Consequently, there are only around 1-2% horned animals in the population today, whereas the colour diversity of the breed is considerably wider than seen in many other bred species.
When cattle breeding associations where established across Iceland, their role was twofold. They took responsibility for record keeping of pedigrees and produced products as well as for jointly owned bulls in their membership area. Overall management of record keeping of production has from the beginning been under the auspices of The Farmers Association of Iceland, an umbrella organization covering farmer’s interests. Around the middle of the 20th century, supervision of the conduct of production records was largely transferred from cattle breeding associations to district agricultural associations, which by that time where operating across the country. In 1974 milk production records where computerized and in 2008 it was totally transformed by establishment of the electronic cattle database “Huppa”. Nearly all of the milk production in Iceland takes place on farms that keep records in Huppa that implies 99% of the cow population being recorded.
In the middle of the 20th century one started to use artificial insemination (AI). The practice became common throughout the country when the use of deep frozen semen was adopted around 1970. Today this method is used on the majority of cattle farms in Iceland. Only one bull center is operated and this serves the entire country.
From the time that AI became centralized for the whole country, the breeding programmes have been operated as a single unit. In 1974 progeny tests of AI bulls began. The programme aims at breeding with varying emphasis on a number of traits. Although products play the most important role, fertility, longevity, udder health, udder and teat type, milking and temper are all aspects of the breeding goal. Care has always been taken to minimize inbreeding in the stock and this has been successful in comparison with larger cattle breeds in many neighbouring countries. Breeding assessments are carried out in accordance with BLUP methods. This means that it is even more important than before to closely monitor inbreeding trends in the population. Preparation for genomic selection began in 2017 and is expected to be in place by 2022.

Being an isolated breed for over 1100 years gives Icelandic cattle a unique position among other Scandinavian cattle breeds and cattle breeds in Western Europe. Although the population is small in terms of a number of animals, it can be subject to further breeding work and progress. Of course, the inbreeding level is always a consideration and has to be kept to a minimum.